The LAA meets for lunch on the second Tuesday of each month at 11:30 am in the NACA Room of the Langley Research Center Cafeteria, which is located on the first floor of Building 2102, at 10 West Taylor Street.  The LAA General Meeting starts at noon featuring interesting and timely speakers. Following the LAA General Meeting,  there is a brief meeting of the LAA Board of Directors.

LAA’s Annual Meeting is held in January for electing the Board of Directors for the new year. Board meetings are held monthly. Special meetings may be called by the President or any Board member. A picnic is held on the second Tuesday in July on the grounds adjacent to the NACA room in the Cafeteria. 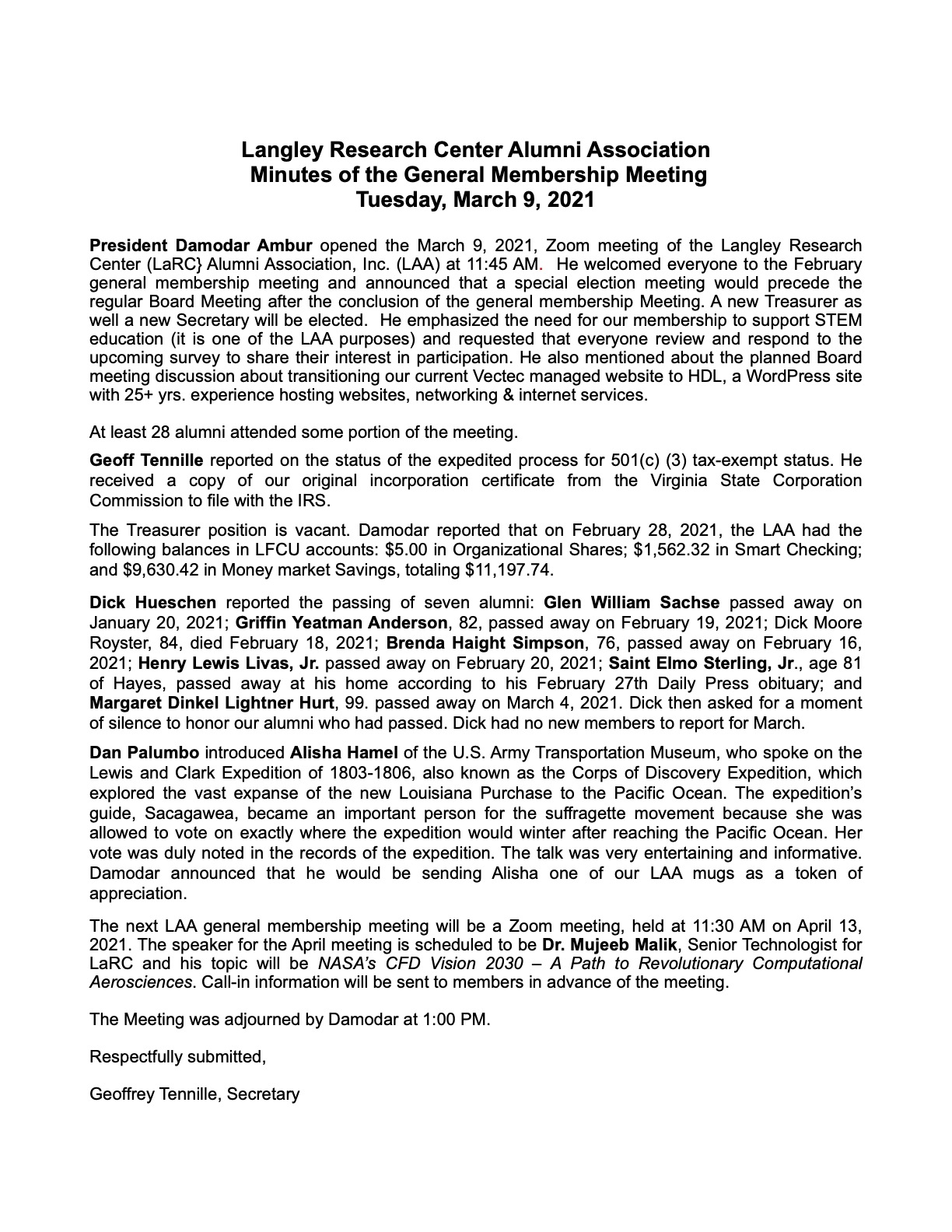 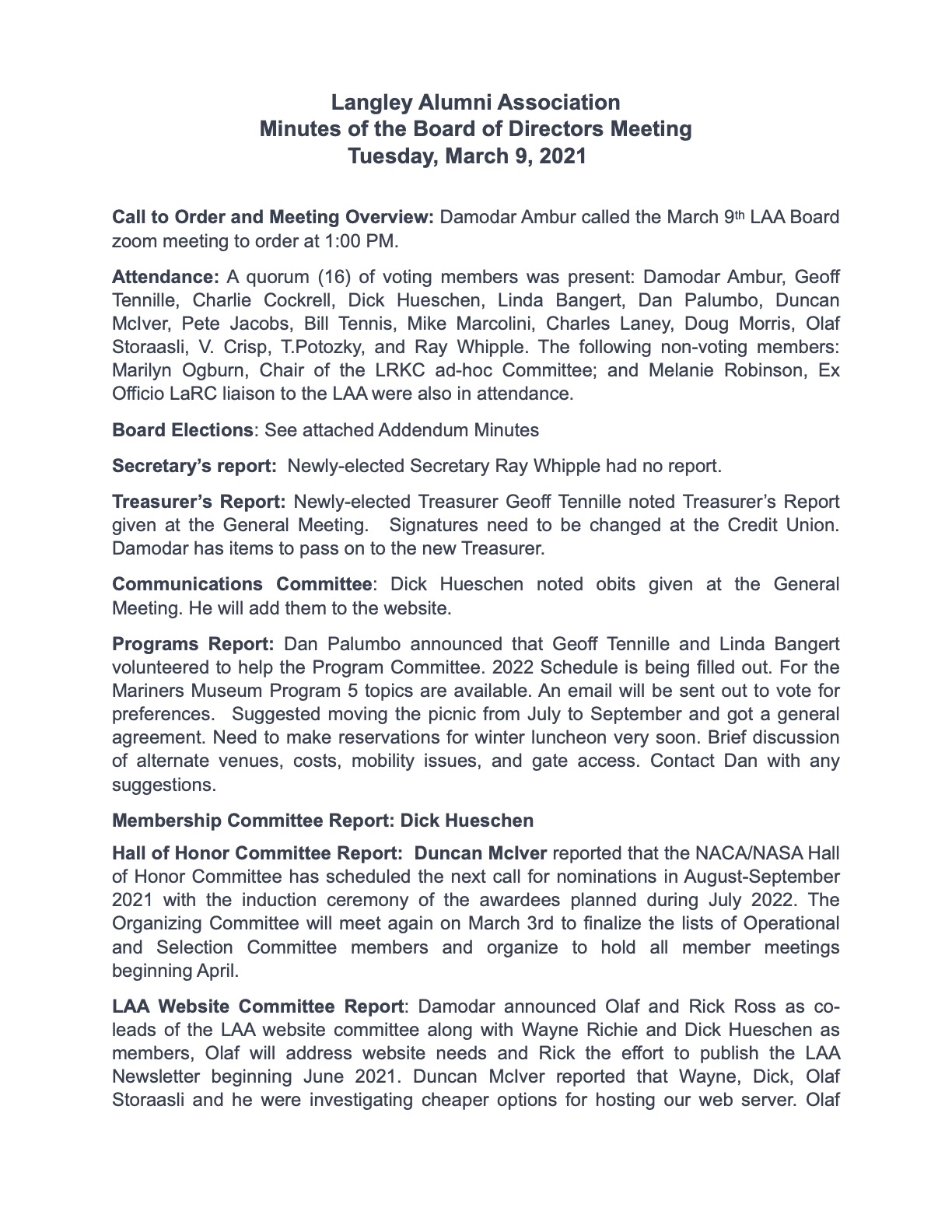 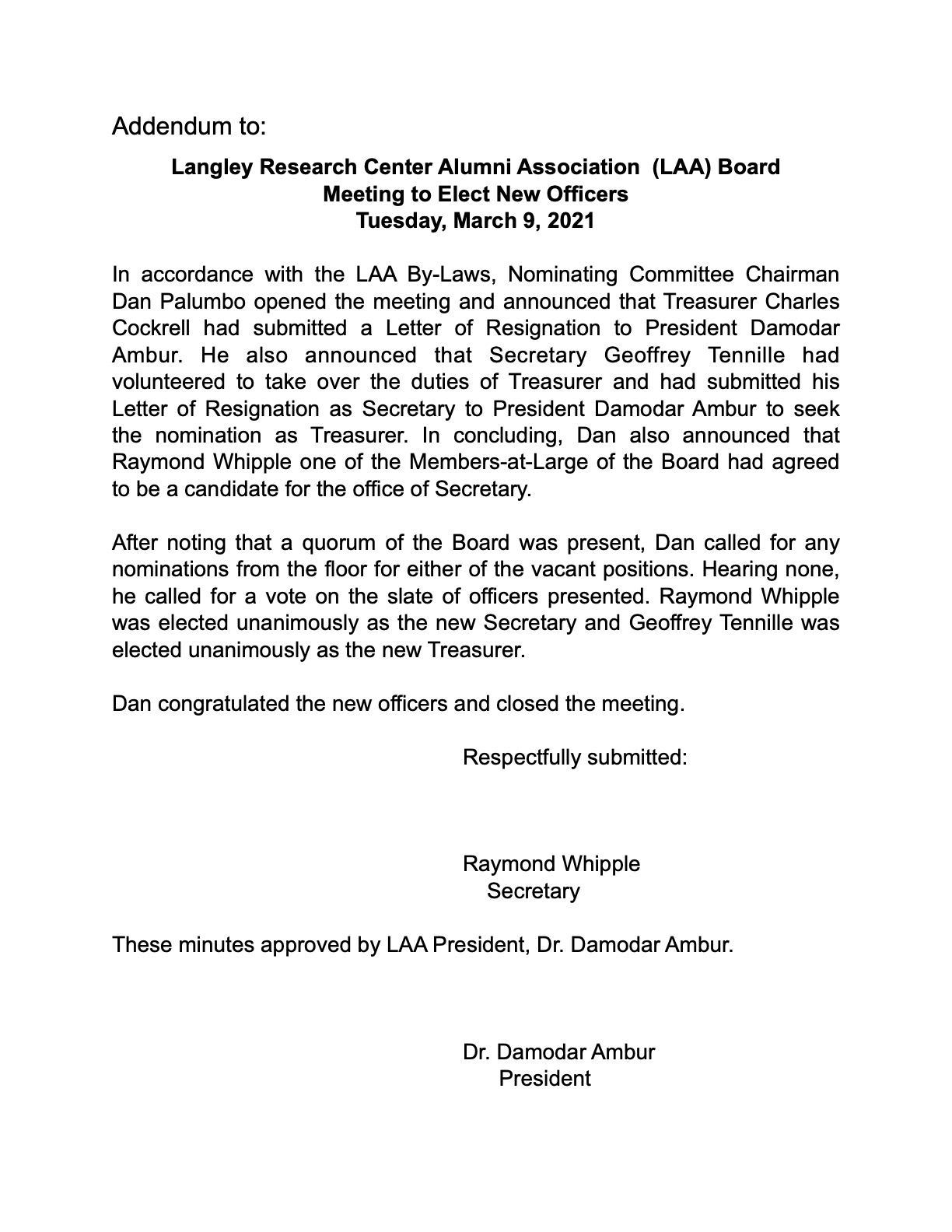 President Damodar Ambur opened the sixth Zoom meeting of the Langley Research Center (LaRC} Alumni Association. Inc. (LAA) at 11:30 AM.  At least 35 alumni attended some portion of the meeting, a portion of which was intended to give alumni the chance to tell everyone what they had been doing since retiring from LaRC. Several members, including Linda Bangert, Duncan McIver, Dick Hueschen, Bob Steuver and Bill Tennis brought us up-to-date with their post-retirement activities. Then the slate of nominees for the Class of 2024, Charles Laney, Vickie Crisp, Mike Marcolini, Olaf Storaasli and Jarek Sobieski had an opportunity to introduce themselves to the LAA Membership.

Dick Hueschen had no report on new members or any deaths among the Alumni.

Charles Cockrell reported that the LAA had $7,498.90 on deposit at the beginning of November.  A deposit of $0.55 from interest and $1,500.00 from membership dues and lifetime memberships, were made into the LAA checking account in November, yielding a final balance of $9,039.45, there were no expenses for November.

Geoff Tennille reported on the status of the expedited process for 501(c) (3) tax-exempt status. The application is nearly complete and will be filed with the IRS on-line by Geoff and Charlie in early 2021.

Dan Palumbo introduced Dave Reubush, the speaker for the December Zoom meeting, who presented “A Personal Story on African Safaris.” It included beautiful wildlife photographs from Zambia and Zimbabwe

Damodar Ambur presented a Speaker gift to Dave, which will be delivered to his home. Dan has speakers through June 2021, for future Zoom presentations.  He reported that the January meeting will elect the 2024 class of Members-at-Large to the LAA Board.

The next general membership meeting will be a Zoom meeting, held at 11:30 AM on January 8, 2020. Call-in information will be sent to members in advance of the meeting.

The Meeting was adjourned at 1:10 PM.

Roger Ferguson called the 2020 Annual Meeting to order on January 14th at 12 noon. A member count was not taken; however, it was evident the meeting was well attended.  Roger reported that 56 people attended the December Luncheon.  Dick Davis and Fred Morrell were recognized for their service to the LAA and were given plaques at the luncheon.

Election of New Board Members

Dan Palumbo recognized LAA Board members that would be rotating off the Board this year.  Thank you, Ed Fasanella, Stewart Harris and Paresh Parikh, for your service.  Damodar and Dan will remain on the Board as members of the Executive Committee.  Dan called for a voice vote to elect the Board nominees who were subsequently elected unanimously.  The new Board members are:

Charlie Cockrell reported that 7 new members were added to rolls this month.  They are John Allred, David Bowles, John Cox, Regina Johns, Mitch Thomas, Frank Williams, and Charles Zeitman.  Charlie then mentioned that membership dues are now due.  He reported that so far 78 members are up to date with 290 members with dues outstanding.  Roger reminded members not to send dues to Dick Davis.

Roger asked the membership if they knew of any Langley alumni who have recently passed away.  The following names were put forward: William ‘Bill’ Deveikis, Bob Feldhousen, Willard Bauserman (apologies for misspellings).

Roger reported that the December Luncheon broke just about even with a ~$6 profit.

Next month’s speaker will be Patrick Troutman.  The 2020 speaker slate is full and can be viewed on the LAA website.

Presentation by the Guest Speaker

Roger introduced Dr. Steve Scotti as January’s speaker.  Steve is recently retired from NASA Langley Research Center where he had served as Chief Engineer for Structures and Materials within the Research Directorate and later as Advanced Materials and Structural Systems Lead.  Steve’s topic was “The Columbia Accident Return-to-Flight and Developing an On-orbit Repair for the Space Shuttle Leading Edge”.

Steve explained that immediately after the Columbia incident the best leading-edge repair NASA could do was a 4” hole.  This was considered inadequate in view of the estimated size of the hole created by the foam impact on Columbia.  All Shuttle flights were then restricted to orbits from which the ISS could be reached as safe haven.  The STS-125 Hubble repair mission, however, could not abort to the ISS if necessary, so a way to repair larger holes in the leading edge needed to be developed.  The Team used a ‘Set Based Design’ approach where 100 raw ideas were simultaneously developed in a competitive fashion.  The approach differed from an iterative design in which hundreds or thousands of design change loops might be required.  In the end a flexible ceramic material was developed which could be attached using ceramic bolts used to repair the 4” holes.  The EVA drill and bit were developed at Langley to reduce force necessary to drill and tap holes in the leading edge.

The next meeting will be held February 11th.  The speaker will be Patrick Troutman whose topic will be “A Greater Context for NASA’s Human Exploration Architecture”.

MINUTES OF THE BOARD OF DIRECTORS MEETING

The January 14, 2020 Board of Directors meeting was called to order at 1:15 pm by the LAA President, Roger Ferguson. A quorum was present.

Dan Palumbo presented the slate of nominees for Executive Officers.  These were:

Dan called for a voice vote in which the slate of nominees was elected unanimously.

Dan Palumbo reviewed the November minutes.  The minutes were approved and will be posted on the LAA website.  Dan reported on his effort to determine the standing of the LAA’s non-profit filing with Virginia and the IRS.  He learned scant documentation was available.  Fortunately, Geoff Tennille has experience in this area and volunteered to contact state and federal officials to confirm the LAA’s corporate standing.

Charlie report was based on Fred’s last report.  The LAA’s account ended 2019 with $6.70 more than it had at the beginning of the year.  Major sources of income and expenses were the Summer Cookout and the Winter Luncheon.  Charlie will begin to work with LFCU to become custodian of the LAA accounts.  We also briefly discussed ways in which members could pay dues (or other expenses) electronically.  More discussion of this topic will follow.  Finally, Charlie handed out Expense Invoices which can be used by Board members to document spending.

Marilyn reported that the she will request a second year for the LRKC as an Ad Hoc committee at the February meeting.  The LRKC will meet with Langley staff Jan 23rd and researchers from Virginia Tech Capstone project soon.

Duncan reported that the next class of Hall of Honor inductees will be in 2022.

The next Board meeting will be February 11th.